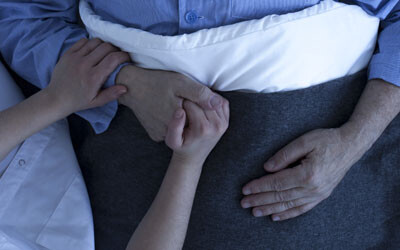 To encourage better end-of-life conversations, Calvary Health Care and its partners, Mercy Health and Catholic Cemeteries + Crematoria, have launched the I Am Living initiative.

Unfortunately, many people fail to prepare for end of life for a variety of reasons and shy away from palliative and end-of-life care, dying, death, loss and grief conversations and planning. National Dying to Know Day, on 8 August 2022, is an invitation to start a conversation about the end of life, according to Calvary Health.

Dr Frank Brennan AM, a palliative medicine physician at Calvary Health Care in Sydney, is part of a group supporting the development of I Am Living.

“As tempting as it might be, don’t shy away from these conversations,” Brennan said. “Navigating these discussions is particularly crucial if you have elderly relatives or anyone with a terminal illness.”

“It is good for a person facing death in the near future to be able to express their feelings, and for them to have the opportunity to share their feelings before it is too late.”

IAmLiving.org.au centres on a series of short documentaries that feature people living with an advanced terminal illness. They speak about the things that matter to them as they face their own mortality. They speak about life, dying, death, loss and grief.

David Cain, an I Am Living contributor, said, “I realise that it is terminal. I’ve realised that for some time. I think it is the uncertainty. You are not sure what’s in store for you, what’s around the corner, whether physically, mentally or financially. Some people overemphasise it, others underestimate it. It is as you find it, I think, on the day.

“I have a medical team that for me has been tremendous. My GP, he can explain to me in layman’s terms, in terms that I can understand. It is having confidence in the people that are giving you advice and your ability to get to people that can you give that.”

Lucinda Harvey, Cain’s daughter, said, “There is a lot of fear and apprehension about how his days might end. We try to empower him, especially now that he’s moved into a palliative phase of treatment. He can decide at the time whether or not he wants to have the treatment that will prolong his time or whether he feels that the rewards of the treatment don’t give him the quality of life that he is used to. It is an empowering situation for somebody to be given more control over how their end will happen.”

Australian Regional and Remote Community Services (ARRCS) has announced it is rebuilding the...